Four Sprague Dawley adult rats (210-260 g) were equipped with the jacket and an electronic transmitter. Respiratory function and the activity of the animals have been monitored using Respiratory inductive plethysmography (RIP) bands included in the jacket and a three-dimensional accelerometer respectively. Cardiac function was also assessed after shearing the dorsolateral region of the animals Ag/AgCl dry gel patches were placed on skin (under the jacket) to record a LEAD-I surface electrocardiogram (ECG).

Signals were recorded during a 2h baseline prior the subcutaneous administration of an opioid analgesic drug (Fentanyl 100 µg/kg) and until 2h post injection. Proprietary software (DECRO v1.0.0) has been used to calculate Activity Levels, Respiratory Rate, Minute Volume and Heart Rate. Individual recordings were averaged every 15 min and relative variations expressed as % change versus baseline levels taken during the last 30 min of the hour before dosing.

Fentanyl produced an immediate respiratory depression with a peak effect reached around 30 min (expected Cmax) : decrease of -58% for minute volume and -38% for respiratory rate (from 170 to 100 bpm). Activity Level of the animals dropped of -84% starting from 47±4mG (corresponds to the alternation of movements and resting phases) down to 8±0.4mG (≤10 mG indicates completely inactive animals). The animals partially recovered their baseline levels from 1.5 hours postdose : -19% Respiratory Rate, -29% Minute Volume and -27% Activity Level relative to the baseline. No significant effect was observed for Heart Rate (variations lower than 10% with respect to the baseline). 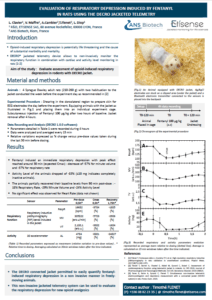